If you are a Linux user and have a Robotics Invention System (RIS) version 1.0 or 1.5, you have a serial infrared (IR) tower, which is fairly easy to set up. RIS version 2.0 came with a USB tower however, and getting that to work isn’t as straightforward. Some of these steps might seem daunting to a novice, but if you follow them correctly you should be OK. 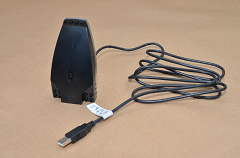 Current versions of the Linux kernel (2.6.*) include support for the LEGO USB Tower by default. There are many Linux distributions, and they’re not all configured the same way. Below instructions were created for Ubuntu version 12.04 TLS 32-bit, one of the most popular distributions at this time.

First make sure the USB IR Tower is connected to your computer. Now open a terminal window to determine if the module actually exists on your system, by running this command:

The output will show you one or more file names with long paths in front of them. Just as long as at least one of them ends with legousbtower.ko, you’re OK to continue. If not, this means your distribution doesn’t have this driver available as a module and you may need to actually recompile your kernel. This article does not cover that.

Now we need to make sure the module gets loaded at boot time. Open the file /etc/modules in an editor, for example with the command:

Add a new line to the end of this file with just the name of the module: legousbtower (without the .ko suffix). My /etc/modules file looks like this.

Save the file and exit the editor. Now reboot the system.
After the reboot, open a terminal window again, and run the command:

You should see output similar to this:

It came up with number 1 for mine, it could have a different number for you, usually legousbtower0. We need to change the permissions on it, run this command:

EDIT: the chmod command only changes the permissions temporarily. I found a more permanent solution.

All done! The USB Tower is ready to be used… But now what?

The LEGO brick programming language of choice on Linux is NQC (at least with the standard LEGO firmware). It has support for the RCX, Scout and Spybotics pbricks. The latest official release doesn’t have USB support for Linux, but thankfully somebody has already made a patch for this, so we can simply get the source code, patch it and then compile it ourselves. This sounds harder then it is, really. I didn’t run into any errors at all (not even on the first attempt!), which probably says a lot about the quality of the code (kudos to David Baum and John Hansen).

Go back to the terminal and create a directory in which you’ll build NQC. For example, I named mine /develop/nqc.  Make sure this is your current directory and it is empty. Then run the below commands, in that order. They will download and extract the sources and patch:

The output of that last command should look like:

So now you have a directory containing the source code of NQC, and the patch to enable USB support on Linux. Now apply the patch like this:

This should tell you it patched 9 files. Now on to compile NQC!

This will start scrolling a huge list of scary-looking output. Just sit back and relax. When it’s all done, check if the binary files have been produced.
Run “ls -l bin/” as shown below, and the output should look  very similar:

This will install NQC, so afterwards you will be able to run the command “nqc” from any directory.

To compile and download an nqc program you wrote yourself and send it to the RCX using the USB tower, run:

10 thoughts on “Configuring the LEGO USB Tower on Linux”