Having always been a fan of their toy bricks as a kid, when LEGO announced the release of the MindStorms line of products I was immediately hooked. The first set I bought was the Robotics Invention System 1.5, probably somewhere around the turn of the century (year 2000). Over the years the set went to the attic to collect dust, but every now and then I returned to it again and I bought some additional stuff. 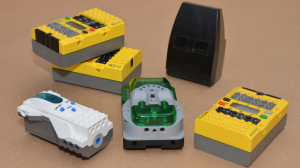 LEGO bricks stay current for decades, but unfortunately electronics do not. Actually, the micro controllers inside these bricks are still great, not many people actually get the most out of them. But they have been discontinued by LEGO when they (understandably) moved on to the NXT line of MindStorms. Another problem is that the original software that came with these bricks often doesn’t run on current Windows versions.

My main purpose with this site is to show how these bricks can still be used today and to keep the information about them available.